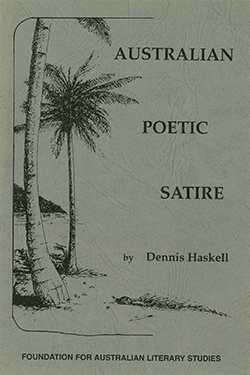 Dennis Haskell is a Senior Lecturer in English at the University of Western Australia and Director of the Centre for Studies in Australian Literature. He has been Co-editor of Westerly since 1985. He has published literary essays in a wide range of areas, including American Literature, Australian Literature, Asian Literature, Modernism and Romanticism, and three collections of poetry: Listening at Night (1984), Touch of Ginger (1992) and Abracadabra (1993). His other books include: Wordhord 1989), Kenneth Slessor (1991), John Keats (1991), and Myths, Heroes and Anti-Heroes: Essays on Literature and Culture in the Asia-Pacific Region (1992). He has also edited Kenneth Slessor: Collected Poems (1994) and Tilting at Matilda: Literature, Aborigines, Women and the Church in Contemporary Australia (1994).