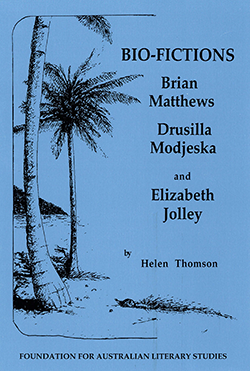 Helen Thomson is a Senior Lecturer in the EnglishDepartment at Monash University. She has edited three novels by Catherine Helen Spence, Handfasted (Penguin 1984), Mr Hogarth's Will (Penguin 1988) and Clara Morison, along with a selection of Spence's other writing, in Catherine Spence (UQP 1987). She has published a number of essays on Australian women's writing and is currently writing a book on female madness in Australian literature, The Madwomen in the Bush. Her teaching interests include women's writing, Eighteenth-century literature, particularly that written by women, drama, and Australian literature. She has been the Melbourne drama critic for The Australian newspaper for many years.