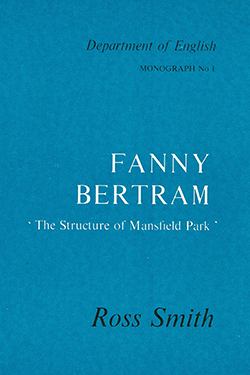 Fanny Bertram 'The Structure of Mansfield Park' by Ross Smith, 1978

Jane Nardin, in her book Those Elegant Decorums, published in 1973, begins her sixth chapter with this sentence: "Mansfield Park is at present Jane Austen's most unpopular novel." It is certainly Jane Austen's most overtly didactic novel, and our present age is not one in which preaching is much in fashion. The chief difficulty, however, lies in the character of the heroine, for she turns out to be incorrigibly gentle and retiring. Her characterization is all the more remarkable in that she is the direct successor to Jane Austen's previous heroine, the vivacious Elizabeth Bennett of Pride and Prejudice. Jane Austen herself, however, came to regard this previous book as being "too light, and bright, and sparkling", and it was followed by the more staid novel Mansfield Park. One of the contemporary opinions of the book, which Jane Austen collected and transcribed, was that of Mrs Carrick, who declared that "All who think deeply and feel much will give the preference to Mansfield Park." It has certainly long been my own favourite among Jane Austen's novels.