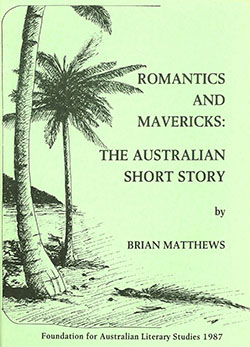 Romantics and Mavericks: The Australian Short Story by Brian Matthew, 1986. Also recorded as Monograph No 14.

Dr Brian Matthews, the 1986 Lecturer, is Reader in English at Fhinders University, and a former Vice-President of the Association for the Study of Australian Literature. He is the author of The Receding Wave: Henry Lawson's Prose, and of many articles and reviews on Australian literature. His biography of Louisa Lawson is due for publication in 1987.

The modest price and format of the Foundation's monographs are designed to make them as widely available as possible.