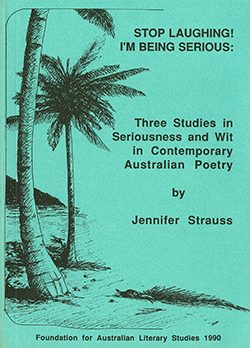 Stop Laughing! I'm Being Serious: Three Studies in Seriousness and Wit in Contemporary Australian Poetry by Jennifer Strauss, 1989.  Also recorded as Monograph No 21.

Jennifer Strauss, the 1989 Lecturer, is a Senior Lecturer at Monash University, where her teaching and research are divided between Medieval and Australian Literature. She coedited the anthology Middle English Verse: A Selection and she is currently completing a book on the poetry of Gwen Harwood for the Studies in Australian Literature Series. She has published three collections of poetry: Children and Other Strangers (1975); Winter Driving, (1981) and Labour Ward (1988) and her poems have appeared in a number of journals and anthologies since 1967. She has served as a judge for the Commonwealth Poetry Prize and the Victorian Premier's Prize for Poetry and was the 1989 Chair of the Victorian Premier's Literary Awards Committee.