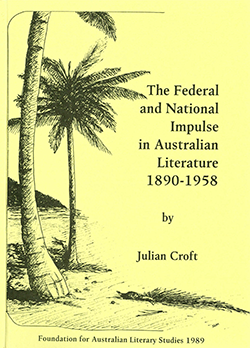 The Federal and National Impulse in Australian Literature, 1890-1958 by Julian Croft, 1988. Also recorded as Monograph No 18.

The Colin Roderick Lectures, sponsored by the Townsville Foundation for Australian Literary Studies, are delivered annually by a distinguished Australian writer or academic at James Cook University, and subsequently published by the Foundation. The series is named for Emeritus Professor Colin Roderick, Foundation Professor of English at James Cook University and distinguished Lawson scholar.
Julian Croft, the 1988 Lecturer, is a Senior Lecturer at the University of New England. He has published widely on Australian and Commonwealth literature, and was co-founder of the Association for the Study of Australian Literature in 1978. In 1976 he wrote a biography of the Anglo-Welsh poet T.H. Jones and co-edited with Don Dale-Jones the Collected Poems of the same writer. In 1983 he edited Kenneth Slessor's Backless Betty from Bondi. A collection of his own poetry, Breakfasts in Shanghai, won the British Airways Prize for the best first book of poetry published in Australia and New Zealand in 1984, and his novel, Their Solitary Way, was published in 1985.