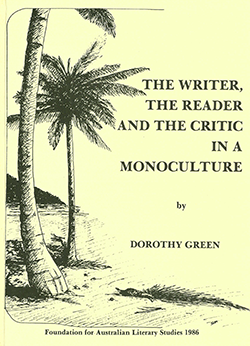 The Writer, The Reader and the Critic in a Monoculture by Dorothy Green, 1985. Also recorded as Monograph No 12.

The Colin Roderick Lectures, sponsored by the Townsville Foundation for Australian Literary Studies, are delivered annually by a distinguished Australian writer or academic at James Cook University, and subsequently published by the Foundation. The series is named for Emeritus Professor Colin Roderick, Foundation Professor of English at James Cook University and distinguished Lawson scholar.
Dorothy Green, the 1985 Lecturer, is one of the most distinguished critics of Australian literature. Her classic study of Henry Handel Richardson Ulysses Bound won the Foundation's prize for the best Australian book of 1973. Her revision of H M Green's standard History of Australian Literature, and her collection of essays The Music of Love, are also major contributions to Australian literary criticism. As Dorothy Auchterlonie she has also written three collections of poetry. The modest price and format of the Foundation's monographs are designed to make them as widely available as possible.